THE EFFORT OF DECISION

We shirk Decisions.—I have attempted to show that the Will stirs at the touch of an uplifting thought. It may perhaps move in the train of vanity, greed, or the like; but, if it do so, it is a mere super-numerary; the forces of nature are so strong enough to carry their ends without an effort of Will. They call, not for choice, but only for allowance. And, yet, there are many little wearing decisions to be made in the course of each day, to call upon the Will for which is like bringing a Nasmyth hammer to crack a nut. So we go on asking ourselves, ‘What will Mrs Jones say?’ ‘Will Mrs Brown be there?’ ‘I wonder which side Holford will take?’ and so on. We try to relieve ourselves of effort by imagining the decisions of our neigbours. This is a wearing process, because our neighbours are many and their decisions are various; and if we take any one man or woman for our guide, we are still thrown out, because circumstances are never the same for two persons. We are forced to act for ourselves, and so many minor considerations press upon us that, like the tired purchaser at the ‘Stores,’ we take, at last, the thing that is offered, for no better reason than that it is offered.
p.157
Indecision is perhaps a malady of the age, nor is it altogether a bad sign. It means a wider outlook on practices, opinions, creeds. Sir Roger de Coverley poses as our patron saint, invoked on all occasions:—there is so much to be said on both sides that we cannot make up our minds; and at last we make them up at a blind run, and find ourselves where we had never meant to be.

‘Toleration.’—We admire this attitude of mind in ourselves, and call it Toleration, a sort of creed that may be summed up in this wise: ‘There is so much of good in everything and everybody, and so much of bad in everything and everybody; and nothing, and nobody, is better than anything else, or anybody else; so where are you?’ ‘What’s the good?’ follows—of going to church, of troubling oneself to vote for this measure of that, this man or that, of troubling one-self about public questions, of offering truth to the ignorant. “What is truth? as jesting Pilate said,” and as we, with a lift of the brows, repeat. ‘Everybody’s creed or opinion is no doubt the best for him, and why should we meddle? We have enough to do to look after ourselves!’
Even about that we need not take much trouble. Some of us have ‘luck,’ and some of us, ‘Providence,’ to make for us all the decisions that matter. This is the sort of unformed thought that goes on in the minds of many people to-day; and they wear themselves out with petty decisions and walk blindfold into great ones.

‘Providence’ and Choice.—But surely, you will say, Providence does fix the bounds of our habitation and guide us in our undertakings. This is no doubt a blessed and restful truth upon which every Christian
p.158
soul reposes; but Providence does not save us from the effort of decision, for upon this effort depends the education of character; and ‘our Father which art in Heaven’ brings up His children. As the wise parent sees that his children are invigorated by proper exercise, so we may venture to think that Providence strengthens the children of men by giving to each opportunities for effort, chiefly, perhaps, for this effort of decision. For the will grows strong by its efforts, and the will is the man.
Ludwig Richter has a charming picture to illustrate ‘Give us this day our daily bread.’[1] A mother is spoon-feeding two dear round babies seated before her with open mouths; behind, is a big brother with his slice of schwartz brod; a sower has gone forth to sow in a neighbouring field, and a bird follows in his wake for private ends. Here we have the story of providential dealings. The sower sows, the mother feeds, and God giveth the increase. But these do not wait; they work with open eyes and busy hands, and the good that comes to them comes on the lines of their own efforts.

Opinions and Principles.—But, though the labour of decision is part of that sweat of our brow by which we earn our bread of every sort; yet, if our decisions mean worry, fuss, anxiety, and fatigue,—whether it be about the buying of a yard of ribbon, or the furnishing of a house, or the choosing of a career,—we may be quite sure we have got off the right lines; that Will is in abeyance, and we are being torn in pieces by conflicting desires or affections.
The decisions of Will are always simple, because they have, for good or ill, an end in view outside of
p.159
Self. As we have seen, no part of us works alone in a watertight compartment. Throughout our lives, Will has been busy, taking counsel with Imagination, Reason, Conscience, Affection; and forming, by degrees, those great decisions on conduct which we call Principles, or those upon matters of thought which we call Opinions. The opinions and principles are at hand for little and great occasions. Our business is see that we are not distracted by manifold little movements of Self. Then our decisions are prompt and final; we are not fretted by wondering if we have made a mistake, or, if we should have done better by deciding otherwise.
We have done the best that is in us, with prayer if it be a matter of any uncertainty; and then we are sure that we have Providence with us, as the sower has, whether the immediate harvest be rich or poor. We gain, at any rate; there is more of us for the next time of action, and we go our way with added strength and serenity.
You will say this is no ready-made way to a quiet life. No; but in all labour there is profit, and without labour there is no profit, whether in things of the heart or of the hand. 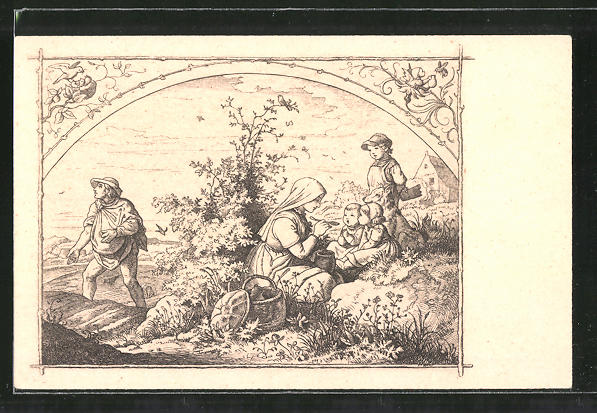 This picture is not in Charlotte Mason’s original Volume.